We hung out with Marnie from Girls, which launched its sixth season on NOW TV. She was awesome and smashed interviews with Huffington Post, Vogue, BBC Radio 5 Live, Marie Claire, London Live, and Elle.

We got buff at Third Space, working with personal trainers Leo Savage and Gary Gideon to put people through a bespoke Jaybird challenge as we launched the X3s in the UK

Our design team won a brief from IOSH to support with a five-year branding plan and full web design for http://www.ioshwork2022.com/. We also began our unhealthy obsession with Horizon Zero Dawn and launched it in the UK. To top it off we also launched voice search for Sky Q, with Terry Mynott bringing the lols.

In April we hit every Spring Sense with the Flower Council of Holland, before teaming up with Claudia Winkleman to expose parent lies to celebrate Big Little Lies coming to NOW TV. We closed the month with some Tot Cross Buns, baked goods themed around NOW TV Kids Pass shows.

PAAAAAAAAARTY with the Ultimate Wars WONDERBOOM launch, which took place at Lights of Soho and saw 109 people dance the night away. We also did a press trip Portugal to show off the Sony Xperia XZ Premium’s super slow motion video capture, and launched Aptaclub’s ‘Active For 2’ campaign with a pregnant Binky.

June was a roaring success thanks to the Dinosaurs in the Wild celebrity and media preview event in Birmingham. We also helped coordinate a 90 minute live DJ stream to unveil the WipEout Omega Collection Soundtrack, which people loved.

Mid-summer went techy thanks to the Xperia Touch, a projector straight out of the future. Taking over a West End venue we had an array of influencers, lifestyle and consumer-tech media down to get hands on. We also got glam in Ibiza with Ultimate Ears and a load of top tier influencers.

We made a load of new friends down at Columbia Road Flower Market (hey albert), a video which has had more than 300k organic views. Flexing her creative muscle, our Lead Designer Lauren was featured in a Creative Review double page spread, which is some of the best coverage of the year frankly.

Get ready, this was a busy one. We launched a pop-up Trolls salon under a bridge for NOW TV, we ran a Rocket League tournament with the Sidemen for SYFY, found a contender for World’s Fastest Gamer while at insomnia with Logitech and created London Fashion Week outfits out of flowers for funnyhowflowersdothat.co.uk. LET US SLEEP.

To usher in Autumn we got all zen with Adam Husler, a yoga teacher who showed us how to create a plant filled sanctuary at home for thejoyofplants.co.uk. We also hosted a hygge themed showcase event for Skagen watches, and carved movie scenes into pumpkins for Sky Cinema.

What happens when you get a micro artist to paint movie scenes onto popcorn? We get loads of coverage for Sky, that is what. What about when you get grime superstar Bugzy Malone to release a Walking Dead themed track? Same thing, but for NOW TV. And if you put Jack Whitehall in a G-Wiz car with some influencers? Not loads of coverage but only because it was an exclusive with UniLad so back off with your judgement.

How to go out in style? Turn loads people into baubles with a Sony phone 3D scanner, endorse an amazing charity with Binky and Aptaclub, take a load of people to Mercedes-Benz World to get them playing GT Sport and then racing real cars, and seed Sky Q party packs with influencers to generate a post reach of 915k. 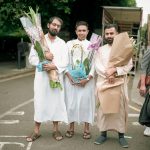 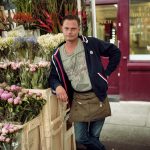 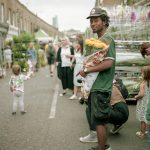